Death Came Knocking At Our Door

On my 'About' page, it states that my ever-faithful writing companion is Sadie, a beautiful cat with the saddest eyes you’ll ever see. 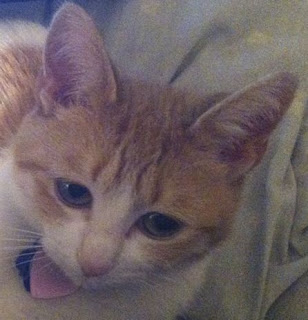 Twenty-four hours ago, I held Sadie in my arms as she took her last breaths. She wasn't quite seven years old. She took ill quite suddenly, and deteriorated quickly.

I keep wondering how long it will take for me to stop expecting to see her when I turn a corner. When will I quit waiting for her to climb into my lap when I sit on the couch? When will my bed feel less empty at night?

I know it's only been one day, but it already feels like it's been forever. I miss her so much.

Keep your loved ones, both human and furry, or scaly or slimy or whatever floats your boat, close tonight. Love them fiercely. Let them know what they mean to you. You never know how quickly they'll be ripped away from you.
Posted by indigowren at 2:00 PM 1 comment:

Tonight, I watched a movie that always makes me cry. I don't get to watch it often, as it would irresponsible to expose my kids to it at their ages. At the point where the tears always come, I was reflecting on how the author of the book the movie was based on must have had to work SO HARD to get the voice of her characters just-so.

I hope that someday, I can stumble across a blog entry by someone, whether it's a reader or a struggling author like myself right now, who has read something of mine and is in awe of my work. That would be the ultimate compliment. That would be the icing on top of the authoring cake.
Posted by indigowren at 11:23 PM 1 comment:

A little over a week ago, an old friend contacted me with an offer to send me some old poetry that I had sent him approximately twenty years ago. I jumped on the offer, with the thought in the back of my mind that I was missing a good chunk of my writings from my youth from my collection. I received the package last Tuesday, the 19th, and was in awe. There was an inch and a half thick stack of just poetry that I had written from 1992 through 1996 and, as I had suspected, I had lost a lot of them over the years.

I have spent anywhere from two to four hours per night over the past week typing up the poems I was missing, and making adjustments to the ones from which I had been missing such details as the dates they were written. I realized when I was done going through those poems that my digital collection was probably missing some that my own hard copy collection had in it, so I pulled out my 3 inch binder and went through it, one by one, and made adjustments where necessary and typed up the missing poems. All told, I’ve worked on 227 poems over the past week ranging from 1992 through 2000.

It’s been an eye-opener. Some of those poems were, well, abysmally terrible. What do you expect from a twelve, thirteen, fourteen year old? But the growth that I went through as a person is obvious as you read through the years. There are a few poems that I am quite proud of, in particular, but at the same time, I’m quite shy to share them. I feel that my poetry bares a part of my soul that my fiction doesn’t expose, and it’s a raw nerve that twangs painfully whenever someone flicks it by reading it. So, for now, I shall leave it at maybe someday.

Among the poetry were some stories I wrote nearly or over twenty years ago and forgot about. At least one of them has got some really good bones in it, and completely rewriting it will be my NaNoWriMo project in November, or perhaps for Camp NaNoWriMo in July, depending upon planning completion.

I haven’t written anything, not a single original creative word, since early February. It is now late May. That’s almost four months of radio silence. That’s the longest I’ve gone without writing in years. I was starting to wonder what was going on, what was the deal. With this unexpected influx of forgotten memories, words have started swimming around in my brain again, too, so I have hope that the words will flow with relative ease when I do sit down to write again.
Posted by indigowren at 4:37 AM 1 comment:

Save The Last Dance is officially available on Amazon, CreateSpace, and Smashwords! Check out the links on the Books page, and be sure to let me know if you buy a copy!
Thanks to everyone who has supported me in this journey. I appreciate all of you so much!
Posted by indigowren at 6:28 PM No comments: